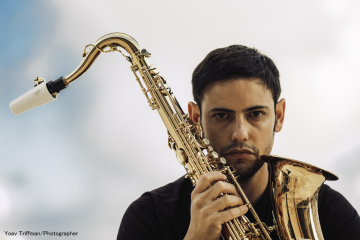 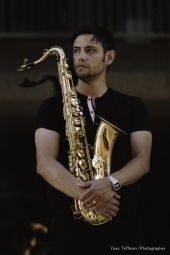 “Animi”, the title of the new album from Israel-born, Luxembourg-based saxophonist Shauli Einav, derives from a Latin word signifying what we might call soul, life force, mettle or heart. It’s an apt descriptor for Einav’s profoundly expressive music, which ranges from heartrending to exhilarating, and for the deeply empathetic rapport that defines his quintet.

Throughout, Einav’s improvising, writing and bandleading reveal a fresh voice working in jazz’s edgy, modern ainstream. His language is fiercely personal, built upon influences that demonstrate both exceptional taste and a willingness to look toward the margins of jazz’s well-trodden history. In his playing you’ll hear underrated heroes like Harold Land, Lucky Thompson, Charlie Rouse, Booker Ervin and Arnie Lawrence. His signature approach to composing and arranging is culled from diverse sources, including the modal explorations of George Russell; the bracing close voicings that Jason Lindner employed in his powerful big band; and the polyrhythmic wizardry of bassist Avishai Cohen.

Shauli Einav has been described as a “remarkably complete musician, a virtuosic soloist with a lush sound on both soprano and tenor whose compositions are daring and deep” (All About Jazz).

Born in 1982 in the countryside of Israel, he was in 1998 discovered by the legendary American saxophonist Arnie Lawrence who came to Israel to bring peace between Jews and Arabs through music. Lawrence was the connecting piece between Jerusalem and Tel Aviv musicians to New York City’s Jazz heritage where Einav moved in 2006.
During his career, he released 6 albums with his different ensembles. He played with some of the leading jazz figures such as Aaron Goldberg, Avishai Cohen, Don Friedman, Eliot Zigmund, Omer Avital, Johnathan Blake, Shai Maestro, Walt Weiskopf, Frank Gambale, Dave Liebman or Gilad Hekselman and performed at venues and festivals all over Europe, Asia and the US.
Back