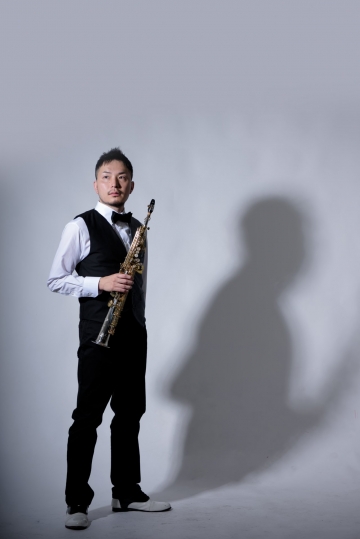 Masahito Tsuda was born in Sapporo, Hokkaido, Japan.
He graduated from SHOBI College of Music and furthered his studies at Senzoku Gakuen College of Music. He was awarded the Maeda Anniversary Music Encouragement Award and the Award for Performance Excellence, performed in the concert for graduates, and was specially chosen for the on-campus selected artists’ concert. He performed with the Edogawa Philharmonic Orchestra after winning first place in the woodwind section at the 20th Annual Edogawa New Artists Concert. Masahito was awarded highest prize at the 4th Annual France Chamber Music Competition, and first prize in all sections at the 8th Annual Le Splendel Music Competition, and second prize in the chamber music section at the 10th Annual Yokohama International Music Competition, among various other performance awards.
Masahito began his professional performing career during his years at music college. Not only did he perform solo recitals in Tokyo and Sapporo in 2011 and 2014 respectively, he also played with the Tokyo New Philharmonic Orchestra and in various ballet performances.
He has played on the Noriyuki Makihara Japan National Tour and recording, a tribute album to John Lennon, Fuji Television in the drama “Nodame Cantabile”, as well as commercials for Daiwa House Japan, FM Tokyo, television, radio, and magazines. He has been involved in other jazz, pop, and fusion artists' stage performances. Masahito has performed with numerous ensembles and has been active in holding recitals, concerts, and live performances across Japan since 2006.
He performed as a representative Tokyo Heaven Artist in 2012 and 2014 at the East Japan Natural Disaster Charity Concert and participated in La Folle Journee au Japon 2016. He released the album “Beau Aile” as a member of the Serie du Trio, and he released the album “genic1” (fontec) as a member of the JG. Masahito has further branched out into the fields of composing and arranging, is a Tokyo Heaven Artist, a saxophone ensemble trainer, and a private saxophone tutor.
He is an active member of DIC-TER., Serie du Trio, SaxraZy, and Ensemble Allegro.
Masahito studied saxophone under Shinichi Iwamoto, Kazuo Tomioka, Hiroshi Hara, Nanaho Makino, and Shunei Ibayashi, and chamber music under Yoshiyuki Hattori, Kazuhiro Ninomiya, and Shinichiro Hikosaka. He was tutored in improvisation by Masataka Hirano. He took master classes under F. Moretti, J. Ledoux, and E. Russo, in addition to a jazz saxophone master class taught by K. Hitchcock.
Official website:http://www.tdworld.net/
Back