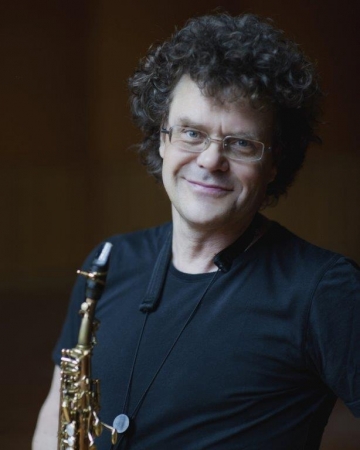 Anders Hagberg is a soprano saxophonist, flautist, composer and Professor of Musical performance/Improvisation at the Academy of Music and Drama/University of Gothenburg in Sweden.

Improvisation and boundary crossing collaborations are the hallmarks of Anders, and his projects often includes artists from various genres and cultures as well as other art forms such as dance and visual arts. His musical synthesis, combines the improvised freedom of jazz with an archaic Scandinavian lyricism and influences from oriental music.

He performs worldwide as a soloist with international jazz and world music groups and his international collaborations include artists from India, Japan, South Korea, United States, West Africa and Brazil. With a substantial number of recordings to his name, he has been commissioned to compose music for several films and dance performances.

As a Professor of Musical Performance in saxophone and flute he is involved in teaching and artistic research.

“I have been playing Yangisawa sopranos since I got my first one, S-880 back in 1987. It was love at first sight and I have stayed with Yanagisawa because of the warmth of the sound, a great projection and perfect intonation!”