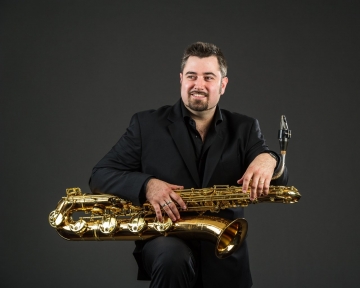 Jay completed his Bachelor of Music (B.Mus) in 2004 at ‘Sydney Conservatorium of Music', a Masters of Music Degree (M.Mus) in 2010 at Escola Superior de M?sica Porto (ESMAE) Portugal, and is currently completing his Doctorate of Musical Arts (DMA) at the University of Sydney. From 2003-2005 he worked with the Sydney Conservatorium and Mark Walton in the pioneering program of video conferencing. Since then Jay has held teaching positions in the United Kingdom, (2004-2007 - 'The Hall School’, ‘City of London Boys School’) in Venezuela (2008-2010 - El Sistema, Caracas) and has given masterclasses at the Conservatorio de Astor Piazzolla - Argentina, Conservatorio de Musica Simon Bolivar - Venezuela and the Queensland Conservatorium - Australia.

Jay has performed throughout Europe, South America and Australasia as both a soloist and chamber musician. Jay is a founding member of ‘Nexas Saxophone Quartet’, 'Sydney Saxophone Collective' and ‘Alianza Banda de Tango'. Jay has also performed with many orchestras and bands including Simon Bolivar Orchestra (Venezuela), Simon Bolivar Symphonic Wind Orchestra (Venezuela), and the NSW Police Band (Australia).

Jay Byrnes is an endorsed artist for both D'addario Gold Artist and EGR ligatures. He has also been a Yanagisawa Saxophones Domestic Artist in Australia since 2008 and is excited to become an official Yanagisawa International Artist in 2015.