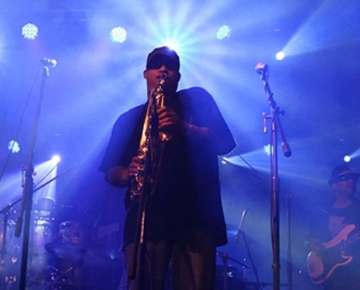 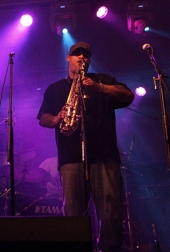 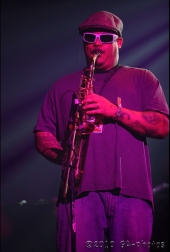 A Berklee alum, and saxophone legend, Sam Kininger has been in legendary funk/soul groups since the beginning, including, but not limited to Lettuce and Soulive. He has also performed with larger pop acts such as Dave Matthews Band, DJ Quick and Wyclef Jean.

As a solo artist Sam Kininger has developed a distinctive, organic sound on the saxophone that is strongly expressive. He consistently demonstrates his technical dexterity and rhythmic precision while maintaining an honest and innovative exploration of musical improvisation.

His debut album includes completely original instrumental funk/jazz compositions. The grooves are intense and the solos are aggressively rhythmic and deeply soulful. Loaded with guest musicians, Sam Kininger’s album features some of the most talented musicians on the scene, including Eric Krasno (guitar) and Neal Evans (organ) from Soulive, the legendary Fred Wesley (trombone) from George Clinton’s Parliament and James Brown’s JB’s, and Adam Deitch (drums), a former member of guitar legend John Scofield’s band.

In addition to touring with his own “Sam Kininger Band”, Kininger continues to perform with Lettuce and, on occasion, Soulive as well.
Back