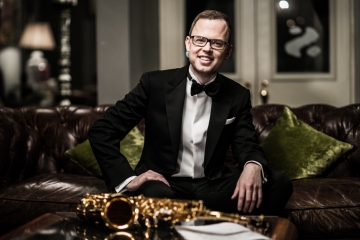 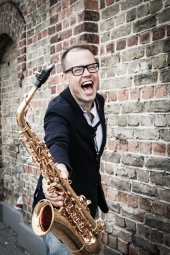 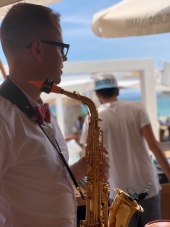 Musician, producer, teacher. Has been improving his music since 2006 by taking part in several master classes and festivals, from which one of the most famous is Saulkrasti Jazz festival. By experimenting and searching for the best music style for him, where he could prove himself and show it, has learned different music styles, such as jazz, soul, blues. After the Saulkrasti Jazz festival in 2006. Janis has studied in the musical institute in Freiburg. During his studies he improved his skills as a saxophone player, music producer and manager.
Other than studio work Janis has performed at such festivals as “Rigas Ritmi” (2006 and 2008), music festivals “Nommejazz ” (2008), “Saxophonia” (2009), clubs “Bbars”, “Aqua luna lounge”, Wabadus cafe and restaurant, club Clazz in Tallin.
At the same time he continued his studies at Rīgas Izglītības un vadības akadēmija (Riga education and management academy), pop and jazz section. He also studied at Deniss Paskevics private jazz and pop school “Performing art school”. During his studies he improved his producer skills and did his internship at the recording studio “Soundvision”. Additionally Janis has studied with jazz master Jerry Bergonzy in a Spanish city Cadiz, where private master studies are held for 2 months annually. It was a great opportunity to learn from excellent jazz personality who has performed with world class musicians: Dave Brubeck, Billy Hart, Mike Sterns, Dave Santoro and others. Jerry Bergonzy is also working as a teacher at Boston’s “New England Concervartory of music”.

Since 2009 a great cooperation with musician DJ Uvis, who has heard Janis Danevics performance with project Soul Emotin, has been created. Experiments have been made with different music styles: soul, elektrojazz, and lounge. As a result is an idea to create a duet with the name soulful project DjsUvisJDanevics. This music is interesting and peculiar with introducing traditional live saxophone music with soul, jazz or blues with different sounds, leading to acidjazz and electro. This music style is followed by saxophone improvisation with different sound effects and video projections.

Soulful project DjsUvis & Janis Danevics has started working on their debut album “Someone like you” in 2012, which will be directed towards electrojazz, lounge and soulful music. A producer and a good friend for this project, expert in this music style, is Andrey Emelyanov as well as musicians DjsUvisJDanevics production. A supporter for this new album is a Scandinavian company “Scania” Latvia. 2014/15 Soulful project record double CD album “So Good”.And in 2016/17 year recording lounge and experimental album “All about you”
By the spring of 2017 Janis Danevics getting through the first saxophonist Baltics, which ambassador a 3D print mouthpieces from syosmusic which are made in France.