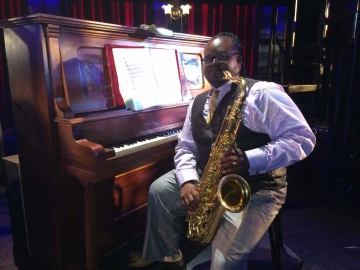 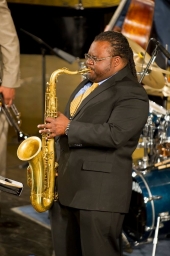 Anthony Nelson, Jr. ignites fans with his melodic originality.  Fusing together jazz’s classic tranquility, gospel’s spirituality, funk’s rougher edges and neo-soul’s undeniable velvet ease to produce a sound unlike anything on today’s shelves.  A saxophonist, flautist, clarinetist and bass clarinetist, Nelson is blessed with an inherent talent that is boundless in its ability to reach across generational and genre lines.

Possessing a gift that was cultivated from birth, Nelson is an avid student of song, becoming a member of Cantoris, the prestigious boy’s choir of Plainfield, New Jersey.  He first picked up the alto saxophone at age 11, continuing on to the tenor saxophone by high school.  Nelson began to study the flute and clarinet to diversify his range of musical ability.  Mentored by organist Radam Schwartz at the Jazz Institute of N.J., Nelson would later be featured on Schwartz’s album Magic Tales.

Nelson decided to further his professional studies by enrolling at the University of the District of Columbia.  There he was fortunate to study under master arranger Calvin Jones and master woodwindist, Dr. Leroy Barton.  He later went on to William Paterson University under the tutelage of Gary Smulyan and Vincent Herring.

A formidable talent in his own right, he has served as the clarinetist in the quintet of MacAruthur award winner and Grammy nominated violinist, Regina Carter, touring and appearing with her on NPR's Jazz Set. His credit list includes such powerhouse artists as: the Ojays, the Duke Ellington Orchestra, Faith Evans, "Joe", the Ray Charles Orchestra, Henry McKenzie Davis, James Weidman, Ralph Peterson, the Count Basie Orchestra and the Cab Calloway Orchestra, Cecil Brooks III and T.S. Monk, Steve Turre to name a few..

Nelson has three CD offerings, "Testament: Live At Cecil's", his debut solo CD, which stayed on the JazzWeek charts for 10 weeks, "Tenor For Two" and "Live @ Twins Jazz".

Touring with the play “The Devil’s Music: The Life and Blues of Bessie Smith”, named one of the top 10 Off-Broadway experiences of 2001 by the New York Daily Times, his expert solos dominate the instrumental accompaniment.