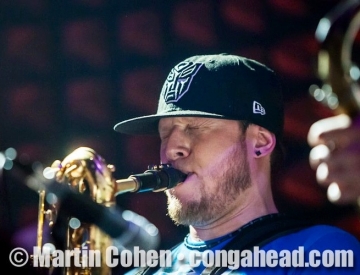 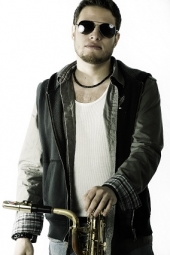 Billy Carrion Jr. never attended a music prep course, music camps, or a major musical school; instead it was passion, and hard work that has driven Billy’s young 15 year career. Even though he can be seen performing on as many as 13 instruments, baritone saxophone is his voice; even with a custom effects board developed for the baritone saxophone, dubbed "The Harmonic Weapon." Going the "old school route," Billy used the music of the past, along with his logic, to learn, and earn his way into musics elite performers, instead of the more traditional lessons, and various music programs. Despite those things, he has managed to record and perform and remain prominent in many corners of music. His major achievements as a side man have blessed Billy with performances and recordings with some of musics legends including Eddie Palmieri  (Latin Jazz & La Perfecta), Ray Barretto, Henry Cole & The Afrobeat Collective, Los Pleneros De La 21, Jerry Medina y la Banda, Papo Vazquez, Ned Sublette, Don Sonero, Deecoy, The Fiendz, Robert Fitzpatrick, United Nation, Victor Manuelle, Andy Monta?ez, Nestor Torres, Tom Vella And The Wayside, Last Perfect Thing, Cecilia Celeste, Jak Tripa, Quincy Jones’ artist Alfredo Rodriguez, Joe Magnarelli, Giovanni Hidalgo, David Oquendo, among others…

Current running ensembles on saxophone include:

* Three Free
Billy Carrion Jr., Jon Di Fiore and Luke Celenza have been performing music for years. Their long-standing friendship is the tie that binds them together.
They represent a strong collective thread from years of playing in Big Bands, traditional Piano Trio and even a Free Jazz Quintet. This time, they’ve formed a new Ensemble stripped back to baritone saxophone, keyboards/piano, and drums. They’ve also written new “themes and vibes” that play to each other’s musical personalities.
https://itunes.apple.com/us/album/three-free/id836776285

* The Rican Rebels
Billy’s Roots to the world ensemble. Taking everything he has learned as a sideman of 15 years, he joins with some of the best musicians Puerto Rico Has to Offer, and performs a blend of Puerto Rican Roots, electronic soundscapes, melodies, and world rhythms from around the world to create a unique sonic experience. (Album out late 2014)
Billy also has a group that varies between 3-6 members that includes himself on baritone saxophone as well as.
http://jazzbarisax.com/baritone-saxophonists/next-generation/billy-carrion-jr/
featured on Jazzbarisax.com