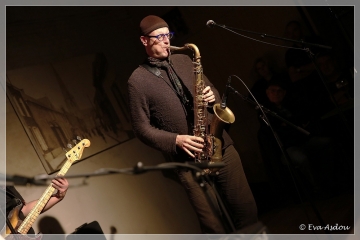 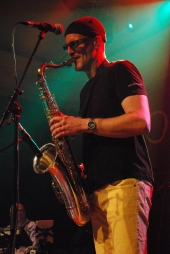 Frank was born in Kortrijk (Belgium) on June 18, 1968 and started playing the saxophone at the age of 12. Soon he was influenced by a number of "greats of the earth" from the jazz, pop and rock-circuit, including Stan Getz, Chet Baker, Charlie Parker, Junior Walker, Ray Charles, Herbie Hancock, Peter Erskine, Michael Brecker, Jan Garbarek, John Coltrane, Stevie Wonder, James Brown, George Clinton, Bootsy Collins, Prince, Deep Purple, Led Zeppelin, Queen, The Police and many others. Already at a young age, Frank was considered as a great talent in the Belgian music-scene and he experienced a great deal of on the road with various jazz, pop, rock and funk ensembles.
At the age of 18, Frank wins the knack Youth Jazz Trophy, awarded by Toots Thielemans in the Casino of Ostend.
Frank taught at the music academy in Kortrijk, the music academy in Overijse, Tervuren and Hoeilaart, the conservatorium of Ghent and the jazz studio in Antwerp.
Since 2006, Frank teaches saxophone and combo at the summer music camp in Dworp, by request of Maarten Weyler. Frank met Carlo Mertens (trombone) and Nico Schepers (Trumpet); after a bunch of productions and collaborations, Carlo, Frank and Nico decided to found a 3 piece Horn section.
The first real horn section in Belgium was born: The Heavy Horns. This section has built up a strong reputation. Always searching for sound, energy, perfection, fun, evolution and friendship. The Heavy Horns played on countless national and international productions (cd, TV recordings + live performances.)
Frank met Piet Goddaer (Ozark Henry). They compose music together for the CD "Sunzoo Manley: To All Our Escapes .Frank plays tenor sax and clarinet. Stephane Galland (Aka Moon, Joe Zawinul syndicate) plays the drums on this one. Piet produces. This CD is released on the Epic label and is distributed by Sony.
Frank was given the honor to play the saxophone solo on the BELGIUM / 175 YEARS event in Brussels. Belgium and the whole Royal family witnessed an unforgettable moving and magical moment. After a gig, Frank meets Michel Bisceglia (Fellow musician, composer, arranger and president of Prova Records). Plans and ideas pop up to record a first solo CD.
In 2012 Frank records his first acoustic solo CD: Frank Deruytter Quartet. Frank writes all compositions. Line up on this CD: Peter Erskine (Drums), Eric Legnini (piano), Bart Denolf (Contrabass)
This CD was released in April 2013 on PROVA RECORDS, fine label of Michel Bisceglia.
Frank is someone who has always been distinguished by his exceptional sound, openness, soul and diversity in style.
Frank is a very popular and demanded soloist, and tours all over the world without a break.

Frank is endorser of Yanagisawa saxophones and Vandoren reeds.