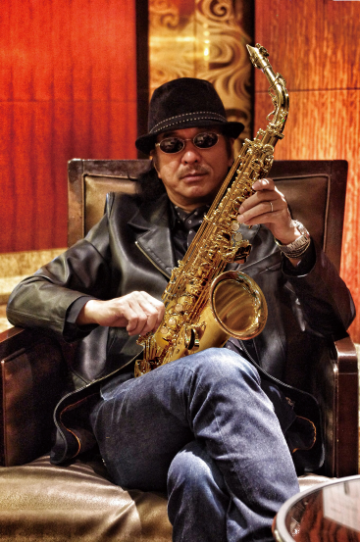 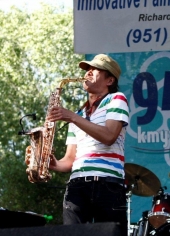 Saxophonist and composer Hisaaki Kanzaki was born in Kochi Prefecture. His love for the saxophone began in junior high school, influenced by such artists as Sadao Watanabe, Miles Davis, Sonny Rollins, and Art Pepper to name but a few.
Upon graduating from university, Kanzaki formed Kanzaki on the Road, a group that became a leading force behind Japan's fusion boom. In 1980 he released his debut album, "Open My Road" from Nippon Phonogram (Mercury Records). Following that he released two more albums before going to the US in 1986, where he participated in numerous sessions.
In 1988, Kanzaki teamed up with Russ Freeman & The Rippingtons, Rickey Minor, David Benoit, David Garfield, Phil Perry, and others and released the album "KANZAKI." On returning to Japan he became involved in the music production field, working on many theme tunes for commercials and TV.
Some years back, Michael White (from the George Benson and David Sanborn band) recorded "So Far Away," a Kanzaki composition. Around that time, Kanzaki gained widespread acclaim as a composer when his album title tune hit ninth place on the US jazz charts (radio and records).
Kanzaki went on to establish international projects including "Asian Soul Brothers" with best friend Michael Paulo (sax). Within Tokyo’s club scene, he joined forces with music producers Keigo Tanaka and Asako Toki in 2003 to produce compilations as the rockboys & feat.kzsax, creating the "buffet style."
In 2005 he brought out the sounds of "Otemachi Cafe" under his own label, Real Play Records. The following year saw Kanzaki issue a re-release of "KANZAKI" along with "OZONIC," a work featuring string quartet.
In the course of his prominent and successful career, Kanzaki has developed a deep passion for collaboration with international artists inside and outside Japan, and in that spirit has frequently served as a special lecturer at Musashino Art University.
His unconventional image and music style continue to grow and influence others within the music scene.
Back