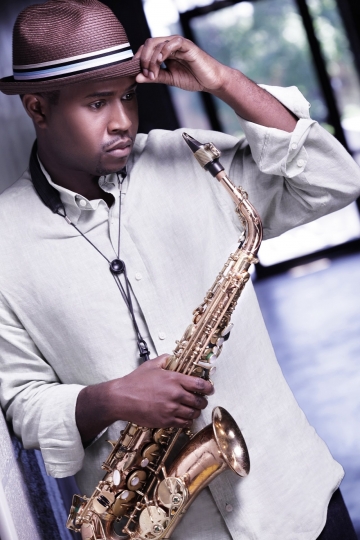 Forging a deeply personal sound from a broad swath of the jazz landscape, saxophonist, composer and arranger TIM GREEN has emerged as a powerful new voice, melding deftly swinging hard bop, fluid modernity, and soulful gospel.
Called “a player to watch” by JazzTimes, Green seized the attention of the jazz community with his second-place finish in the 2008 Thelonious Monk International Jazz Saxophone Competition. He delivered on the promise of that prestigious honor with the release of his 2012 album Songs From This Season, on his own True Melody Music label.
The album, a stylistically diverse set distinguished by Green’s knack for establishing direct emotional connection to his listeners, features a stellar cast of established and rising jazz stars. The impressive list of sidemen on the session includes pianist Orrin Evans, vibraphonist Warren Wolf, guitarist Gilad Hekselman, drummers Rodney Green and Obed Calvaire, and several of Green’s collaborators in the thriving Baltimore/Washington DC jazz scene.
Green is a native of Baltimore, where he grew up surrounded by music. His father and uncle are singers, while his older brother was a trumpet player who Green emulated. While still attending high school at the Baltimore School of the Arts, he was selected from amongst more than 500 hopefuls to join the 25-member Grammy High School All-Star Band, which performed at the recording industry’s gala awards ceremony in Los Angeles.
He received his Bachelor of Music degree from the Manhattan School of Music, where he studied under the tutelage of renowned instructors such as Dick Oatts, Gary Dial, Steve Slagle, and Bob Mintzer. The latter, a longtime member of the Grammy-winning Yellowjackets, calls Green “one of the brightest saxophonists on the scene.”
In 2003, he was invited to be a part of the Jazz Aspen Snowmass summer program under such luminaries as Lewis Nash, Russell Malone, Benny Green, Wallace Roney, and Christian McBride.
“Tim Green is a dynamic musician,” says McBride, the ever-in-demand bass giant. “If you make a checklist of everything you’d want in a musician, Tim has it all.”
In 2007, Green earned his Masters in Jazz Studies from the University of Southern California’s Thelonious Monk Institute of Jazz, where he came under the guiding lights of legends like Herbie Hancock, Wayne Shorter, and Terence Blanchard. The master trumpeter calls Green, “a very talented musician with a wide array of creativity. His sound and writing are built on the strengths of our heritage while also containing a forward looking approach to create his own very personal sound."
After graduating from the Monk Institute, Green returned to his native Baltimore, where he is a key component of the city’s burgeoning jazz community. He still maintains an active presence in New York, and has been mentored by piano great Mulgrew Miller, who has called Green “a talented, committed, and accomplished young artist. And most importantly to me, he has a song in his heart.”
The endorsement of such elders spotlights Green’s role as a torchbearer for the modern jazz tradition. Through Miller, Green has been taken under the wing of one of his idols, saxophonist Kenny Garrett, who has been tireless in his encouragement and support of his young protégé. He’s also received bandstand endorsements from several heavy hitters who have called upon him as a sideman. The list includes Miller and McBride as well as pianist Eric Reed and the Carl Allen/Rodney Whitaker group.
All of those influences helped mold Green into the confident and versatile composer revealed on the original pieces that comprise most of Songs From This Season. But just as important to his sound is the rich life experience he has earned: rising through the ranks of the Baltimore jazz scene, serving his apprenticeship alongside acclaimed bandleaders on stages throughout New York and the world, and providing inspired accompaniment to the world’s greatest gospel stars.
While he was raised in the church, gospel was not a significant aspect of Green’s musical upbringing. But upon moving to New York, he was enlisted by fellow Baltimorean Marvin Thompson to join his Mo’Horns brass section, which backed gospel stars like Fred Hammond and Richard Smallwood. Gospel has since become a vital element in Green’s musical vocabulary, and he has played or recorded with the likes of Kirk Franklin, Donnie McClurkin, Yolanda Adams, Israel Houghton, and Mary Mary. His 2005 debut album, Divine Inspiration (G Major Records), featured hymns and spirituals, and he has performed on BET’s hit gospel competition series Sunday Best and the Stella Gospel Music Awards.
On the more secular front, Green has performed with a wide range of artists including Roy Hargrove, Jon Faddis, Hubert Laws, Kenny Burrell, Patrice Rushen, Queen Latifah, Joe Chambers, Sean Jones, and Wynton Marsalis. He is also a member of the 75-piece Soulful Symphony, founded by conductor Darin Atwater, which recently undertook a residency at Baltimore’s Meyerhoff Symphony Hall.
In recent years Green has begun to mentor a younger generation in his native city, serving as the saxophone professor at Morgan State University and teaching at his alma mater, the Baltimore School for the Arts.
With roots that run deep in a variety of fertile soils and branches that reach wider and farther with each new venture, Tim Green is blossoming into one of the most exciting new voices of his generation.
www.timgreenmusic.com
www.youtube.com/timgreen918
www.twitter.com/timgreenmusic