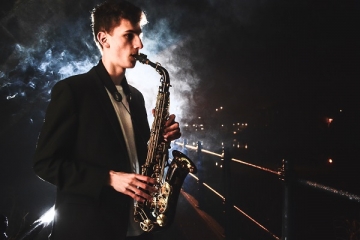 Alexander Bone was born in Darlington into a musical family. He started playing saxophone at the age of six, taught by his father, but began playing jazz piano at an even earlier age. He plays in several groups including big bands and jazz quartets. As well as his jazz studies, Alexander is passionate about music production.

Alexander achieved his grade 8 jazz saxophone at the age of 10, acquired all four diplomas for jazz saxophone and finished with the Fellowship Diploma (FLCM) by the time he turned 18. He also passed his grade 8 jazz piano with a distinction aged 13 and was awarded a place at Chethams School of Music where he studied with Iain Dixon, Les Chisnall, Steve Berry & Richard Iles. Alexander was a member of the Greater Manchester Jazz Orchestra and the National Youth Jazz Collective and has played with high profile names including Snake Davis who mentored him and Stan Tracey.

Alexander has recently worked with global artists such as Nile Rodgers, Kylie and Dannii Minogue and chart-topping producers Rudimental. He’s performed live and written arrangements for internationally-acclaimed artists including Newton Faulkner. Alexander was a soloist with the BBC Concert Orchestra and is a member of jazz quintet The Jam Experiment, who won the 2014 Jazz North Introduces scheme and have already performed at many British jazz festivals and venues. He won the first BBC Young Jazz Musician of the Year 2014.

Alexander currently studies jazz at the Royal Academy of Music in London.