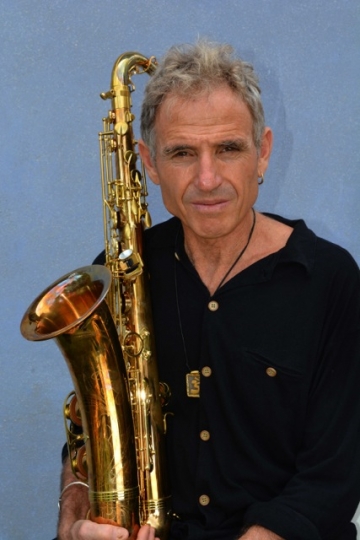 Saxophonist, Composer, flutist  & Improviser, Albert Beger was born in in 1959 and raised in , ’s musical sensibilities were informed from a young age by the vast cultural melting pot that surrounded him. The deeply diverse and eclectic range of sounds he heard offered a rich musical landscape upon which to draw continuing inspiration ? a colorful palette of melody, harmony and rhythm that would impact his future direction as a composer and improviser.
Albert’s eclectic tastes are evident in his own compositions. Listening to his energetic, soulful pieces one hears a confluence of styles. A “World Music” that the term “world music” simply doesn’t do justice to ? bebop, hard bop and free jazz, contemporary classical and ethnic music, progressive rock and electronica ? delivered in an indefinable style that is pure .
And of course there’s that sound: free of border or limitations…a spark reaching beyond to grasp the fire of the Divine …a fearless, joyful noise that embraces experimentalism and tradition, and lyricism and frenzy, with equal passion, love and respect.
Albert has spent years wood-shedding his instrument, a reflection of his penchant for self-discipline and auto-didactic study and an uncanny love for the saxophone and its seemingly endless aural possibilities. His formal education consists of a BA earned in Composition and Performance from the Berklee College of Music in and a Masters in Music from the Rubin Academy of Music and Dance in . He currently holds teaching positions at the and and heads the Instrument and Performance Department at Musik, a new school for contemporary music in Tel Aviv.
has recorded 12 albums of original compositions since launching his professional career in 1991. He has also collaborated on numerous projects with both local and internationally acclaimed jazz musicians, playing in a wide range of challenging improvisational settings. The long list of musicians with whom he has traded riffs both on stage and in the studio include master instrumentalists such as William Parker and Hammid Drake; Harold Rubin, Asaf Sirkis and Gabriel Meyer; John Bostock, Hagi Fershtman,  and Joelle Leandre; James Newton and Roman Kontzman; and composer Eric Shapira.
Albert is the recipient of the Landau Award for Performing Arts (2005) and Israel’s highest honor for musicians, the prestigious Prime Minister’s Award for Composers (2009).

“I chose Yanagisawa Saxophones because I know for certain they are the best saxophones in the world. The combination of the most comfortable mechanical mechanism and a warm, rich sound makes the ultimate formula for all modern type saxophones. I truly believe this is the best choice for every saxophonist who is looking for mechanical reliability and current sound”    Albert Beger
Back