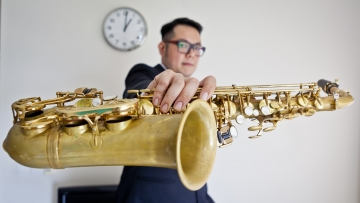 Julian Chan is a freelance saxophonist/flutist based in Kuala Lumpur,
Malaysia. He graduated with a Masters degree in Jazz Performance from Queens
College in NYC, where he studied with jazz greats Antonio Hart, Michael Mossman,
(the late) Prof. Howard Brofsky and David Berkman.

Julian has been actively performing, since 2001, in Malaysia and other
parts of the Asian region, such as Singapore, Thailand, Indonesia, Taiwan and
China. He has performed with various Malaysian jazz luminaries - Michael
Veerapen, David Gomes, Junji Delfino, Jose Thomas among others; performed and
toured with Chinese international pop artistes such as Jonathan Lee (李宗盛) and
Jeff Chang (张信哲), as well as Malaysian pop artistes such as Ning Baizura, Dayang
Nurfaizah, Anuar Zain, Sheila Majid, Sharizan Borhan, among others. He has also
established himself well as a prominent saxophonist in the Malaysian music
scene, whether as a sideman, bandleader and as an educator. He is currently an
active member of one of Malaysia’s most sought-after jazz outfit, WVC TRiO+1, as
well as his own New Quartet.

Julian has been involved in a large variety of projects, ranging from club
shows, concerts, festivals, album and commercial recordings, music tours, as
well as theatre. He has recorded in several albums, both jazz and non-jazz.
Among notable albums he has recorded are Jonathan Lee’s SENSE AND SENSIBILITY
CONCERT (2006), Fung Chern Hwei’s FROM THE HEART (2010), Claude Diallo Situation
LIVE AT NO BLACK TIE (feat. JULIAN CHAN) (2010), WVC TRiO+1 ELEVEN (2009), and
to-be-released 2014 album by WVC TRiO+1 - WAITING FOR THAT DAY.

When not performing, Julian also teaches saxophone as a private instructor,
as well as an adjunct lecturer at the Institute of Music, UCSI University. He
also gives workshops/masterclasses in various music schools and music colleges
in Malaysia.