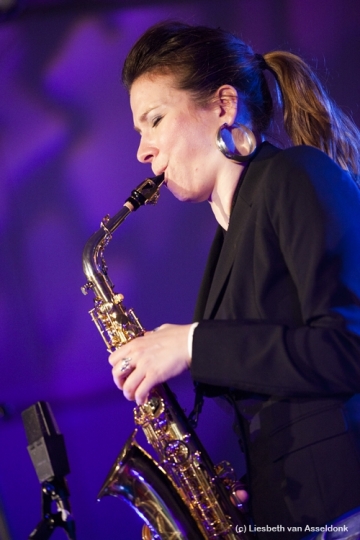 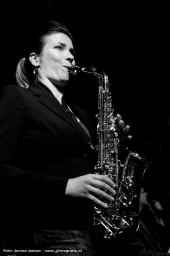 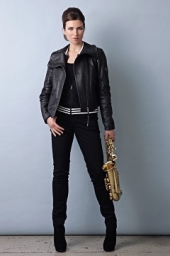 Susanne Alt is a saxophone player and composer, living in Amsterdam. So far, she has released 5 albums.
Since 2006 Susanne has been using Youtube almost like a concert diary, uploading more than 200 videos of her live concerts. http://www.youtube.com/venustunes
Up to now the clips have been viewed more than 500 000 times and counting.. By using social media and Youtube, Susanne created a dedicated worldwide fan community, still growing each day.

Susanne Alt was born into a musical household. Her father, Hans-Joachim Alt is a composer, poet and piano teacher. Her mother, Maria Alt, is a guitar teacher. After learning classical piano and guitar from her parents she started to play the saxophone. Soon she successfully took part in saxophone competitions. 1993-1995, still in school, She took classical saxophone lessons at the Meistersingerkonservatorium Nuremberg. 1995-96 she studied one year there, fulltime. During that year Susanne began to get into jazz. Also in 1996 she won the "Siemens-Jazz-Förderpreis" and moved to the Netherlands to study jazz saxophone at the Conservatorium van Amsterdam (1996-2000). At about the same time she was a member of the National Youth Jazz Orchestra Germany. After graduating in Amsterdam, she studied from 2000-2003 at the Universität der Künste, Berlin, Germany at Peter Weniger. In the early 2000’s she won prizes at the jazz competitions in Leiden and Breda, The Netherlands, and became finalist of Leipziger Jazznachwuchsfestival, Germany (2002) and Dutch Jazz Competition (2004). In 2004, Susanne released her debut album “Nocturne”. 2007 she founded her own label VENUS TUNES and released “Delight” with special guest Anton Goudsmit on guitar. 2009 she released “On Track” with special guests Bruno Speight on guitar (guitar player of Maceo Parker) and Fred Wesley on trombone. Fred Wesley, the legendary trombone player of James Brown and Parliament Funkadelic, invited her back for a tour in the Netherlands and France to join his band “Fred Wesley and the new J.B.’s”

Since 2009 Susanne has been collaborating frequently with Jamal Thomas (drummer of Maceo Parker).
Since 2009 Susanne has performed as a guest with P-Funk legend George Clinton and Parliament/Funkadelic. Besides playing jazz, soul and funk Susanne has always been doing a lot of freelance work in other musical genres and formations, and also can be heard on jazz/house recordings and performances with dj’s through whole Europe. Some dj’s she works/has worked with: Erick E, Roog, Natarcia, Promiss, Martin Damen, Ronald Molendijk, DJ Maestro, DJ Alankara and the dj’s at Wicked Jazz Sounds.