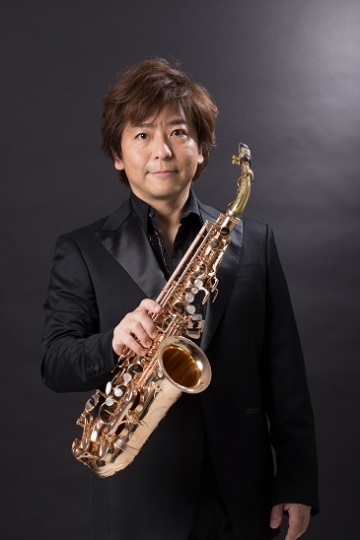 A native of Kobe in Hyogo Prefecture, Takahiro Miyazaki started piano at age 8, picked up the saxophone at age 13, and became active with local jazz groups at age 16.

After graduating from university, he spent three years at Berklee College of Music in Boston and had opportunities to perform with Natalie Cole and Nat Adderly.

Miyazaki first met and developed close friendships with members of the group T-Square in New York. Later, after his return to Japan, he became an active T-Square member himself. In the period leading up to that event, Miyazaki performed with the Boz Scaggs Japan Tour as well as with domestic artists touring Japan.

In 2000 Miyazaki left T-Square and launched his solo career. In that capacity, he has performed extensively in session work and recordings and has held regular lessons and clinics in Tokyo, Nagoya, Osaka, and Kochi.

In 2004 he performed together with the Azuchi Takahashi unit A.O.I on their CD, "Mouth to Hands," and in 2006 released "Nostalgia," a solo album on the Pony Canyon label.
In 2010 he has organized the unit Teatro Raffinato with basist Hitoshi Shimono, and released debut album "La Partenza" in December 2011, and 2nd album "equals beauty" in June 2013.

Miyazaki has attracted a broad following of saxophone fans with his powerful yet soulful tone.